WHAT IS THE DIFFERENCE BETWEEN FIRST LEAF AND FIRST BLOOM?

The First Leaf Index is based on the leaf out of lilacs and honeysuckles, which are among the first plants to show their leaves in the spring. This Index is associated with the first leafing of early-spring shrubs and other plants.

The First Bloom Index is based on the flowering of lilacs and honeysuckles. This Index is associated with blooming of early-spring shrubs and leaf out of deciduous trees.

HOW DOES THIS SPRING COMPARE TO “NORMAL”?

HOW OFTEN DO WE SEE A SPRING THIS EARLY OR LATE?

In places where spring has sprung, how typical is this year’s spring? Darker colors represent springs that are unusually early or late in the long-term record. Gray indicates an average spring. For parts of California and Arizona, this spring leaf out was the earliest in the 40-year record.

How typical is it for spring to arrive early in Central PA compared to recent decades? An early spring, or early spring leaf out, can occur every 1 to 4 years. As we saw earlier, 2021 would be included in that statistic since northern areas of Central PA saw some early green!

WHEN DID SPRING ARRIVE AT LOCATIONS ACROSS THE COUNTRY?

The First Leaf Index map to the bottom, left shows locations that have reached the requirements for the Spring Leaf Index model so far this year. 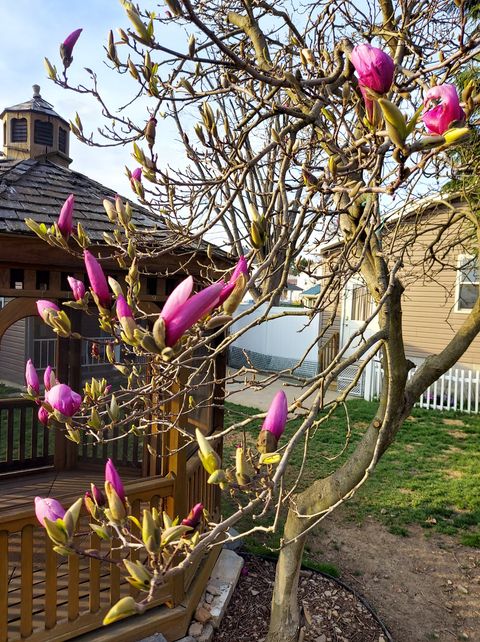 Flower Friday: Many flowers and trees are blooming across the region

A few areas along the southern boarder of the state, like Bedford and Somerset, saw some green as early as the end of March. However, the majority of Central PA saw spring leaf out during the first week of April. This lines up with average timing. Then, as revealed earlier, northern Central PA experienced spring leaf out around a week and a half early.

WHAT IS BEHIND THESE MAPS?

The Extended Spring Indices are mathematical models that predict the “start of spring” (timing of leaf out or bloom for species active in early spring) at a particular location (Schwartz 1997, Schwartz et al. 2006, Schwartz et al. 2013). These models were constructed using historical ground-baesd observations of the timing of first leaf and first bloom in a cloned lilac cultivar (S. x chinensis ‘Red Rothomagensis’) and two cloned honeysuckle cultivars (Lonicera tatarica ‘Arnold Red’ and L. korolkowii ‘Zabelii’). These species were selected because they are among the first woody plants to leaf out and bloom in the springtime and are common across much of the country.

To determine how the current spring compares to “normal”, we difference the day of year the leaf out or bloom was reached this year from the long-term average (1981-2010) day of year it was met. Long-term averages were calculated using PRISM Climate Data daily minimum/maximum temperature data (Oregon State University).

To calculate how often we see a spring as early or late as the current spring, we compare the current year’s Spring Index Anomaly value to the anomaly values from the previous decades. We determine how often a spring was at least this early (or late) by taking the number of years in the record divided by the count of years that were earlier (or later) than the current year.

Apple’s AirTag tracker will probably help you find your stuff, but there are privacy concerns

LOS ANGELES, Calif. (KTLA) - Apple's $29 AirTag might just be the best tracking device ever invented. That's good for your stuff, not so good for people.

These tiny little tags will likely help many millions of people around the world find their keys, backpacks, lost luggage and more. But their good natured tracking could also easily be exploited in ways we haven't even thought of yet.

SAN FRANCISCO, Calif. (KRON) -- Cash incentives, such as $100 payments, could persuade more people to get a vaccine, according to a recent study.

In the survey conducted by the University of California, Los Angeles, more than 75,000 unvaccinated people were interviewed, and about a third of them said a cash payment of as much as $100 would make them more likely to get the COVID-19 shot.

CHICAGO (AP) — Zach Davies allowed five hits in seven scoreless innings, Rex Brothers got his first save in eight years and the Chicago Cubs held on to beat the Pittsburgh Pirates 3-2 on Friday, extending their winning streak to four.

Joc Pederson had three hits and an RBI for the Cubs, who were coming off a three-game sweep of the World Series champion Los Angeles Dodgers. Javier Báez and David Bote had two hits each as Chicago got back to .500 at 16-16.

How valuable is your favorite team? Forbes just ranked the top 50

Today in History: May 7

Critics question whether unemployment benefits stop some from returning to work

Stimulus checks: Over 1M more just went out. Here’s who got one

Missile launch to be visible in Central PA