PORTLAND, Ore. — Smoke and heat from a massive wildfire in southeastern Oregon are creating giant “fire clouds” over the blaze — dangerous columns of smoke and ash that can reach up to 6 miles in the sky and are visible from more than 100 miles away.

Authorities have put these clouds at the top of the list of the extreme fire behavior they are seeing on the Bootleg Fire, the largest wildfire burning in the U.S. The inferno grew Friday to about 75 square miles larger than the size of New York City and was raging through a part of the U.S. West that is enduring a historic drought.

The fire was so dangerous late Thursday and into Friday that authorities pulled out crews. Meteorologists this week also spotted a bigger, more extreme form of fire clouds — ones that can create their own weather, including “fire tornadoes.”

Extreme fire behavior, including the formation of more fire clouds, was expected to persist Friday and worsen into the weekend.

WHAT ARE ‘FIRE CLOUDS?’

Pyrocumulus clouds — literally translated as “fire clouds” — look like giant, dirty-colored thunderheads that sit atop a massive column of smoke coming up from a wildfire. Often the top of the smoke column flattens out to take the shape of an anvil.

In Oregon, fire authorities say the clouds are forming between 3 p.m. and 5 p.m. each day as the sun penetrates the smoke layer and heats the ground below, creating an updraft of hot air. On this fire, crews are seeing the biggest and most dangerous clouds over a section of wilderness that’s made up mostly of dead trees, which burn instantly and with a lot of heat.

For four days in a row, the Bootleg Fire has generated multiple fire clouds that rise nearly 6 miles (10 kilometers) into the atmosphere and are “easily visible from 100 to 120 air miles away” (160 to 193 kilometers), authorities said Friday.

The conditions that create the clouds were expected to worsen over the weekend. 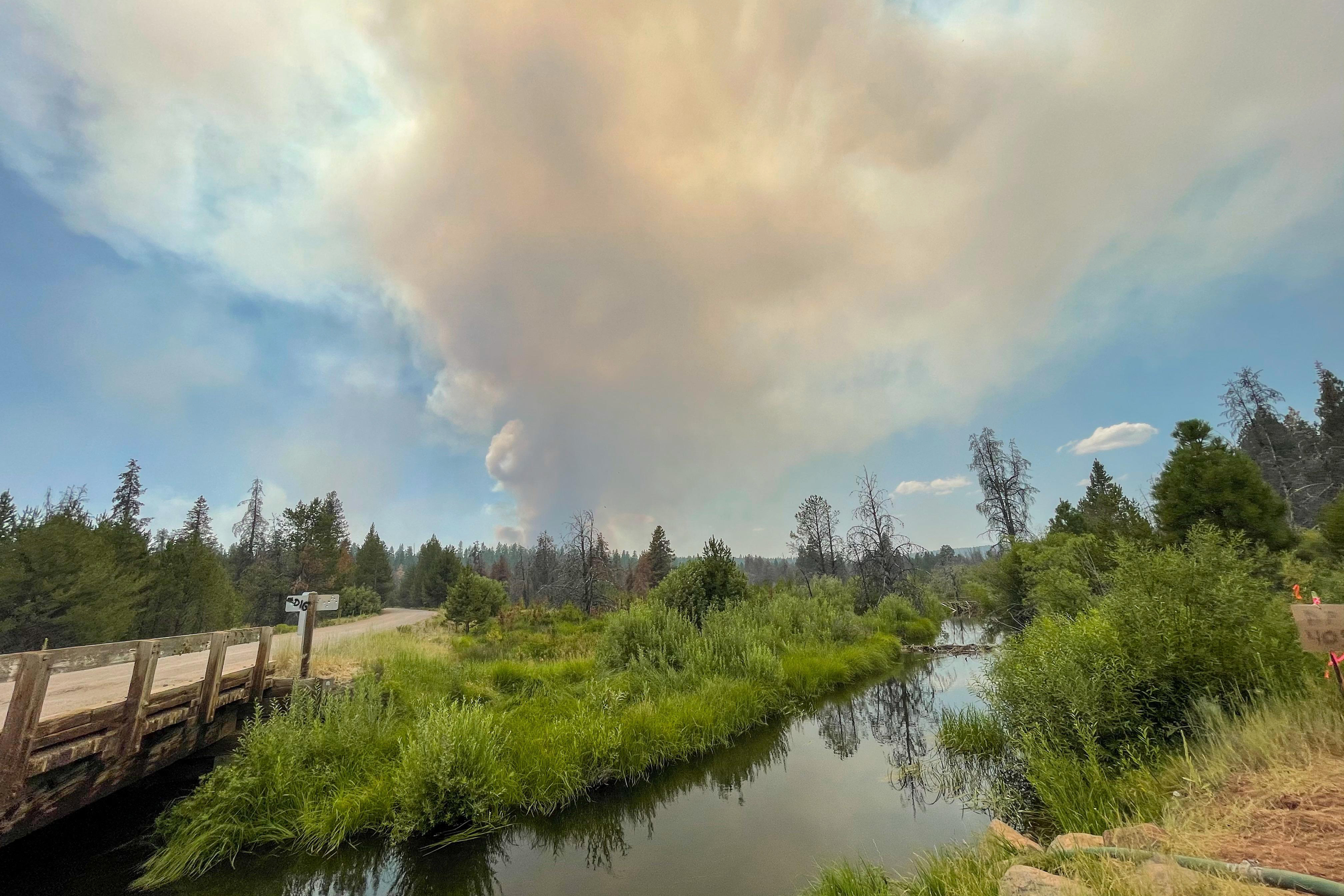 WHAT’S THE SCIENCE BEHIND THESE CLOUDS?

When air over the fire becomes super-heated, it rises in a large column. As the air with more moisture rises, it rushes up the smoke column into the atmosphere, and the moisture condenses into droplets. That’s what creates the “fire clouds” that look much like the thunderheads seen before a big thunderstorm.

These clouds, however, hold more than just water. Ash and particles from the fire also get swept into them, giving them a dark gray, ominous look.

IS THERE SOMETHING EVEN MORE DANGEROUS THAN A ‘FIRE CLOUD’?

Yes. When a pyrocumulus cloud forms over a fire, meteorologists begin to watch carefully for its big brother, the pyrocumulonimbus cloud.

NASA has called the latter the “fire-breathing dragon of clouds” because they are so hot and big that they create their own weather.

In a worst-case scenario, fire crews on the ground could see one of the monster clouds spawn a “fire tornado,” generate its own dry lightning and hail — but no rain — and create dangerous hot winds below. They can also send particulate matter from the smoke column up to 10 miles (16 kilometers) above Earth’s surface.

So far, most of the clouds on the Bootleg Fire have been the less-intense fire clouds, but the National Weather Service on Wednesday spotted a pyrocumulonimbus cloud forming on what it called “terrifying” satellite imagery.

“Please send positive thoughts and well wishes to the firefighters. … It’s a tough time for them right now,” the weather service said in a tweet.

HOW DANGEROUS ARE THESE CLOUDS?

Both types of fire clouds pose serious risks for firefighters.

Multiple pyrocumulus clouds have been spotted for four consecutive days, and one of them on the southern flank of the fire partially collapsed Thursday, causing dangerous winds and embers to fall on crews.

That prompted the emergency evacuation of all firefighters and dirt-moving equipment from that part of the fire line. Authorities say there have been no reported injuries.

WHERE ELSE HAVE THESE CLOUDS FORMED?

These types of fire-induced clouds are becoming more common as climate change lengthens and intensifies the wildfire season across the U.S. West and in other places, including Australia.

Experts with the U.S. Naval Research Laboratory said in a news release Friday that they are seeing a “record number” of these fire-induced clouds in North America this summer, including in Oregon, Montana and British Columbia.

For example, a wildfire in British Columbia last month that leveled an entire town also generated a pyrocumulonimbus cloud.

Blazes in California in 2020 and in the years before have created multiple pyrocumulus clouds, with the Creek Fire in the Fresno area generating a mighty pyrocumulonimbus cloud last fall.

Blair County to participate in National Drug Take Back day

From 10 a.m. to 2 p.m. participants can dispose of expired, unwanted or unused medicines at any of the three sites throughout the county. Sites can be found below:

Delays expected in Altoona as work on 17th Street begins

ALTOONA, Pa. (WTAJ) -- Delays can be expected on 17th street as well as various other roads in Altoona beginning Wednesday.

The city alerted drivers to two projects going on over the next two weeks, one of which will leave 17th street down to one lane while storm sewer repairs take place. The repairs will begin at 7 a.m. on Wednesday, Oct. 20 and go until 5 p.m. It will continue daily for roughly two weeks. Most traffic will be reduced to one lane and drivers can expect delays.

In March, former Emporium K9 officer, Volker Kiefer, was charged with multiple felony counts of child pornography after an investigation led police to discover images saved on his iPad. Originally, Kiefer told police that he accidentally viewed the child pornography, however, he admitted to viewing and saving images once police searched his phone, according to police.

One killed in head-on crash in Bedford County Monday evening

Ex-Hollidaysburg firefighter sentenced for $1.5 million use of FEMA funds

Over 280 scholarships available for eligible students across four counties

1 flown to hospital after I-80 crash