Heat is the #1 weather-related killer in the U.S. and bouts of deadly heat longer becoming more frequent. The Pacific Northwest, a region with historically milder summers, experienced all-time record-toppling temperatures, such as 108℉ in Seattle and 116℉ in Portland. As our climate continues to warm we’re experiencing longer periods of intense heat, even in places that we don’t think of as hot, increasing the risk of heat-related illness.

People in historically cooler regions may be less acclimatized to heat, and lack the infrastructure to cope with it. According to the 2019 American Housing Survey, Seattle, WA is the least air-conditioned city of the top 15 metro areas surveyed. And while the southern United States appears to be better adapted to extreme heat, even these areas are getting hotter with climate change.

NOAA determines a heat index of 90 or above to present risk of illnesses such as heat stroke, muscle cramps and heat exhaustion. Climate Central’s analysis of these dangerously hot days found that the 25 locations with the largest increases in average number of days with a dangerously high heat index were located in the Southeast and Texas—all with over two additional weeks of dangerous heat compared to 1970. Of the 239 stations analyzed across the country, 70% (167) recorded an increase of 3 or more days of dangerous heat, and 46% (109) recorded an increase of a week or more.

Much of the country has struggled with extreme heat over the past two weeks. However, it affects us all unequally. Higher risk categories for heat illness include children, people over 65, and those with chronic health conditions such as diabetes, obesity, and heart disease. Increased exposure to heat puts those who work outside (e.g. construction workers, landscapers, farm laborers) at greater risk, too. Lower income communities are often more exposed to heat either due to historic redlining, or prohibitive costs of air conditioning. 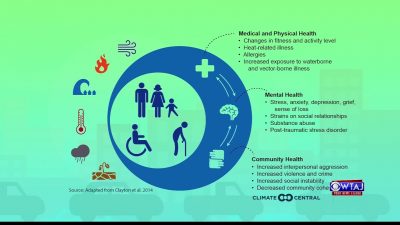 The daily maximum temperature and minimum relative humidity was assessed from 1979 to 2020 at the 239 contiguous U.S. stations typically analyzed by Climate Central, using the gridMET modeled dataset and based on the findings of Dahl et al. 2019. Heat index temperatures were calculated using the National Weather Service’s heat index algorithms. The change in the number of 90°F+ is based on linear regression. Local graphics were not produced for Eureka and Monterey, California or Flagstaff, Arizona due to a lack of days in which the calculated daily heat index met or exceeded 90°F during the study period.

KANSAS CITY, Kan. (WDAF) - Pfizer's coronavirus vaccine may soon be the first to be fully approved by the Food and Drug Administration.

The New York Times reports that because of the delta variant and the number of surging COVID-19 cases, the FDA accelerated the timeline to fully approve Pfizer-BioNTech's COVID-19 vaccine. According to the New York Times, the agency wants to grant full approval by Labor Day.

BELLEFONTE, Pa. (AP) — The former president of Penn State is out of jail after serving nearly two months for endangering the welfare of children by his response to a report that Jerry Sandusky had been seen physically abusing a boy on campus.

According to a press release, medals, pins, patches and dog tags were returned. Including a WWI medal and ribbon, WWII pins, a Republic of Korea Presidential Unit Citation, a Saudi Arabian Medal for the Liberation of Kuwait and a 101st Airborne Division pin and patch were sent to the Treasury as unclaimed property in abandoned safe deposit boxes.

Penn State campuses to require masks indoors, regardless of vaccination

Huntingdon County Fair returns for a full week of fun

Study: Pennsylvania is No. 1 state for teacher pay

Gov. Wolf, alongside 3 other governors call on Cuomo to resign immediately

Wild deer found to have coronavirus antibodies in four-state study

What stores are requiring masks despite vaccination status? Here’s a list

Former fire chief sentenced to one day in prison